Workouts are an important part of a person’s life. But along with the daily workouts, intakes of certain supplements are necessary for the rapid muscle growth in which ‘E’ category supplements.

Are you getting E-enough of these supplements?
Here’s a brief rundown on all the supplements in the “E” category that are interesting and/or effective.Remember, I’ve ranked them from 1-10 with 1 being – don’t even bother, 10 being – you MUST use this supplement, and 2 -9 increasing in importance and effectiveness with the number.

Well known for its immune-protective properties, this herb has been shown to offer some defense against colds and flu, and can be used to protect the immune system from the stress caused by heavy training. Research shows that Echinacea can also reduce the length and severity of colds and flu. Echinacea may also boost the appetite, which can be critical in mass-gaining phases for those who have trouble eating enough. Some research even suggests that echinacea increases production of the oxygen-carrying red blood cells, which could enhance endurance.

Take: Look for products that contain Echinacea purpurea, standardized to 4% sesquiterpene esters, or Echinacea angustifolia standardized to 4% echinacosides. Take 200-400 mg two to four times per day during flu season or at the onset of a cold. To stimulate appetite, take 400–500 mg before meals. If taken for longer periods, it is best to cycle this supplement in periods of three weeks on and one week off.
Rank: 8 – The research on Echinacea has shown both positive benefits and not such significant results, depending on the study. But anecdotal reports that I have received show definite positive results for preventing colds and flu, as well as reducing their length and severity.

EGG PROTEIN
Egg protein is often called egg albumen, or ovalbumen. This is because the major type of protein in egg white is albumen. Egg protein was once considered the perfect protein. That’s because it is a very high-quality protein that is utilized well in the body. Of course, that was long before anyone realized how effective whey protein was. Although whey protein is the most critical protein to take for boosting muscle growth, egg protein can add to whey’s benefits. It is also a good alternative for those who can’t tolerate milk proteins, such as whey and casein. One reason that egg white protein is so beneficial is its high concentration of branched-chain amino acids (BCAAs), which are the most critical for stimulating muscle growth. While whey is also rich in BCAAs, egg white protein provides benefits that whey does not. Egg protein is rich in the amino acid arginine, which triggers nitric oxide (NO) and growth hormone production. It’s also a high sulfur-containing protein, which is crucial to the body’s hormone-producing pathways and therefore muscle growth, as well as aiding joint health.

Take: 10–20 grams added to your whey protein shakes, such as before and after workouts.
Rank: 7 – although it’s an effective protein, I would recommend getting your egg protein from whole eggs. However, if a protein powder that includes whey and casein, also includes egg white protein, that is a benefit. For those who cannot consume milk proteins, egg protein gets a rank of 10. 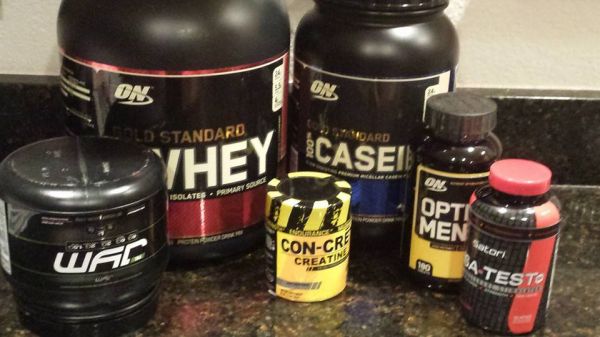 EURYCOMA LONGIFOLIA JACK
This rainforest plant, also known as Malaysian ginseng or tongkatali, appears to directly enhance testosterone production by stimulating the Leydig’s cells — special cells that convert cholesterol into testosterone — of the testicles. It may also free up testosterone in the blood. Testosterone normally circulates in the blood bound to a carrier protein called sex hormone-binding globulin (SHBG). This protein extends the time testosterone stays in the blood, but prevents it from entering muscle cells. E. longifolia Jack is believed to help release testosterone from SHBG so it more of it can enter muscle cells to induce growth. Research has shown that it can boost testosterone and lower cortisol when taken before workouts.

Take: 200-300 mg of a 20:1 extract of E. longifolia Jack two to three times per day with one dose 30-60 minutes before workouts.
Rank: 6 – although some research does show that it can boost testosterone levels and even lower cortisol, anecdotal reports from guys taking the supplement have been less than impressive.

EVODIAMINE
This extract from the evodiarutaecarpa fruit burns fat by stimulating specific receptors in the central nervous system that boost metabolic rate. Evodiamine also reduces hunger and slows the digestion of food, which not only keeps you feeling fuller longer, but causes a slow and steady release of glucose into the bloodstream. This helps prevent spikes in insulin, which could help to prevent fat gain and maintain better energy levels.

Rank: 6 - There is not a lot of research that directly supports evodiamine’s fat-burning effects, and even anecdotal reports are not all that stellar.

Jym training by Jim Stoppani is very helpful and useful in building muscles. Jim Stoppani has been providing this training for many years. Now, he is ready to launch Post Jym, PreJym supplement within a few days.

Take a brief look of the ‘C’ category supplements
Supplement plays an important role in building muscles along with the physical workout. There are various types of Jym supplements available in the ‘A’ to ‘Z’ category.

Chin up bar The Gym you only need
Our free standing pull up bar is solid and stable, it has a good force-bearing capacity and very low vibration during exercising.

Natural Remedies To Overcome Stress and Anxiety (herbal) and The 14 Effective ways to do so
14 natural remedies to overcome the shackles of anxiety and stress. stressful life has become a way of life for many people living in this day and age.

Why Bone Broth Protein is the Perfect Supplement for HIIT & CrossFit
We are not spokespeople for CrossFit, but that is one training genre that is here to stay. In a broader sense, high intensity interval training or “HIIT” is also something that isn’t going anywhere ..
Fitness Nutrition Health
Business details
Jim Stoppani Phd
Jim Stoppani bring all of Jim's research to people using REAL SCIENCE to design REAL PROGRAMS for UNREAL RESULTS. JimStoppani. com is the home to all of the Training, Nutrition & Supplementation.
×